"......The officer rode out beyond our lines to Echkino. While still
at a distance he heard as he rode the merry sounds of a soldier's
dance song proceeding from the house.
“In the meadows… in the meadows!” he heard, accompanied
by whistling and the sound of a torban, drowned every
now and then by shouts......".

This page is devoted to the TORBAN, an unusual instrument from tha family of Lutes that was common in Ukraine and whose popularity spanned two and a half centuries from about 1690 to 1920.

Some clarifications of ethnographic and geographic notions encountered in this article:

Latin has the same name for both Ukraine and Russia: Sarmatia.

The oldest recorded names used for the Ukrainians are RUSYNY, RUSYCHI, and RUSY (from Rus'), which were transcribed
in Latin as Russi, Rutheni, and Ruteni. In the 10th to 12th centuries those names applied only to the Slavic
inhabitants of what is today the national and ethnic territory of Ukraine: Galizia and Volyn'. Later a similar designation was adopted by the proto-Russian Slavic inhabitants of the northeastern principalities of Kievan Rus'- RUSSKIE (of Rus'), an adjectival form indicating that they were initially subjects of ('belonged to') Rus'. Begining in the 16th century Muscovite documents referred to the Ukrainians as
CHERKASY, alluding perhaps to the fact that in and around the town of Cherkasy there were many Cossack settlements. In the 17th-and 18th-
century Cossack Hetman state the terms MALOROSIIANY and MALOROSY, from MALA RUS' (Rus' Minor, the name introduced by the patriarchate of Constantinople in the 14th century to refer to the lands of Halych metropoly and reintroduced by Ukrainian clerics in the 17th century. Rus Minor means Near analogously with Asia Minor, Rus Major meant lands far and beyond), became accepted by the inhabitants as their designation. Those terms were retained in a modified Russian form and used officially under tsarist rule and by foreigners until 1917 (KLEINRUSSISCH). By the 1860s, however, some opposition to the terms became evident in Russian-ruled Ukraine, on the ground that they were as pejorative as the term KHOKHOL.

The modern name UKRAINTSI (UKRAINIANS) is derived from UKRAINA (UKRAINE), a name first documented in the Kiev Chronicle under the
year 1187. the terms UKRAINIANY (in the chronicle under the year 1268), UKRAINNYKY, and even NAROD UKRAINSKYI (the Ukrainian people)
were used sporadically before UKRAINTSI attained currency under the influence of the writings of Ukrainian activists in Russian ruled
Ukraine in the 19th century. In late 18th-and early 19th-century tsarist nomenclature 'UKRAINIANS' was used only in reference to the
inhabitants of Slobidska Ukraine (Eastern provinces of Ukraine under Russian rule since ca. 1660). In 19th-century Polish usage the
people so designated were the inhabitants of Kiev gubernia. Western Ukrainians under Austro-Hungarian rule used the term to refer to their
ethnic counterparts under Russian rule but called themselves 'RUTHENIANS'. The appellation 'UKRAINIAN' did not take hold in Galicia
and Bukovyna until the first quarter of the 20th century, in Transcarpathia until the 1930s, and in the Preshov region until the
late 1940s. In the 20th century MALOROSIIANY or MALOROSY has been a derogatory term used by Ukrainians to designate Ukrainians with litle
or no national consciousness.

Ukrainian as a language started separating from Pra-Slavonic in the 14th century. It fully separated from the Russian by the middle of the 17th, and it came into full blossom as a literary language at the end of 18th. Several important writers and poets in the 19th century established it as such, so much so that it was used even by several Polish and Jewish authors, in spite of intermittent proscriptions imposed on the Ukrainian language by the Russian authorities, who traditionally viewed Ukrainaian only as coarse dialect, worthy of eradication only.

For a more detailed study of the country and its peoples we refer you to the excellent History of Ukraine by Paul Magoczi.

Baroque Lute (pictured here), instrument of beauty and refinement, was gradually falling into disuse over the course ot the 18th century. During it's twilight works of depth and beauty were still being produced. After the death of Sylvius Leopold Weiss, the last great lute Composer and virtuoso of the era, the lute was doomed, although some interesting composers such as Joachim Bernhard Hagen, Karl Kohaut, the several generations of the Sautscheck family [discussed in the previous pages], Scheidler, Reichardt and a few others still toiled for the glory of the instrument well into 19th century.

We would like to argue, however, that the XVIII-th century lute tradition didn't simply disappear save for a few eccentrics. It lived on in Eastern Europe, in the TORBAN, an instument that combined organological elements of Baroque Lute and Kobza-Bandura and is arguably the only heir to Baroque Lute in Europe, and to the lute European Lute tradition in general.

The Lute is scantily documented in Russian history, but some facts stand out. A German chronicler, Jakob von Stählin writes in the 2nd half of XVIII-th century:

1."At just about this time the Imperial Russian court acquired a splendid lutenist, Mr
Belogradski, born a Ukrainian, whom the Imperial Russian Privy Counsellor
and Ambassador, Count Kayserling, formerly (1733) took with him as Pandorist
to Dresden, and apprenticed him to the famous Weiss for several years. He
plays, fully in the style of his great teacher, the weightiest solos and
hardest concertos, and accompanies himself in opera- and other arias, which
he sings with as much strength as grace, in a pleasant 'Sopralto' voice."

Here you may peruse an excellent Andante for baroque lute by Belogradsky, from the so-called Moscow-Weiss Manuscript:

2."To the incomparably better class of music, actually Russian as well, and
certainly also not disagreeable to sensitive ears, belong the Pandor and the
Gusli (psaltery), which are no more to be found among the common people, but
only in the towns and in the houses of aristocrats.
The Pandor, which is also not unknown in Germany, gets pretty close to a
lute in its whole construction as well as in its sound; only excepting that
the neck is usually somewhat shorter, and it is strung with fewer strings.
One could therefore with justification call it the half lute. It actually
originated in Poland or in the Ukraine, from where the most and best
Pandurists in Russia also come. On the whole this province compares to the
other provinces of the Russian empire as by reputation Provence does to the
other regions of France. The southerly situation of the country, an
abundance of all vegetables and fruits, and the naturally-inspired
voluptuous life of the lively inhabitants, are among its chief
distinguishing features. Everyone sings, everyone dances and plays in this
country.

The most frequently-encountered instrument is the Pandor, on which the
expert Ukrainians play the finest Polish and Ukrainian dances, and know how
to accompany themselves in their many and truly tender songs. As nowadays
very many young people in the Ukraine dedicate themselves to this instrument
with special diligence, there has always been an abundance of Pandurists. Of
these many formerly took themselves from time to time to Moscow and
Petersburg, where they were taken on in the houses of great Russian
gentlemen as house-musicians or Pandorists, who sing and play during meals,
but also are obliged to teach this instrument to any of the household serfs
who shows a liking and aptitude for music. These Ukrainian Pandorists are
mostly merry and nimble birds, who in their songs very vividly express
passion with facial expressions and gestures, and otherwise are pretty
accustomed to fooling about. I have known some of the best, who while
singing and playing dance around the room to their melodies in very fine
Ukrainian style, and without the least pause in their playing, can bring a
full glass of wine placed on the Pandor to their mouth and drink from it.
They are always distinguished in their dress from the other servants in the
aristocratic houses, not going about in French or German attire, like the
others, but in long and light Ukrainian clothes, with slashed and dangling
sleeves to their overcoats, like those of the Poles, the front panels of
which they always gather up and tuck into their sashes when they are playing
and dancing."

The most striking point about this passage is that Stählin describes a lute-like instrument apparently similar to the German mandora, rather than the early form of the modern Ukrainian bandura, which is well documented from the early nineteenth century as an instrument broadly resembling the lute, but with a large, almost circular body carrying many diatonically-tuned strings and played in the manner of the psaltery.

The Mandora's heyday (1700-1780) coinsides with that of Kobza, and the proximity of their respective georgaphic realms is notable, as the Mandora's manufacturing and utilisation centered around Bohemia (modern Czech and Slovak territories). Kobza was not unknown in Bohemia, although its local version differs from its Ukrainian counterpart in absence of the "psaltery" set-up.

Stählin's identification of the "Pandor" as the 'half
lute' at the very least suggests that it was a fingerboard-stopped instrument like
the lute proper.

The existence of other Ukrainian lute-family instruments such as the KOBZA, BANDURKA (which is not a diminuitive PANDOR/BANDURA as the name would suggest, but a small 5 string guitar) and the TORBAN confuses the matter further. Here is a relevant paragraph from an XVIII-th century description of Ukraine by Alexander Riegelmann: "There are many fine musicians among them, mostly on violin, bass violin, cymbals, guslis, panduras, lutes, not to mention kobzas and trumpets...." It is no surprize that all three types of Ukrainian plucked instruments are preserved together at the Lysenko Museum.

Here is an illustration from Riegelmann's "Chronicle of Little Russia [i.e. Ukraine]" published in 1785-6: 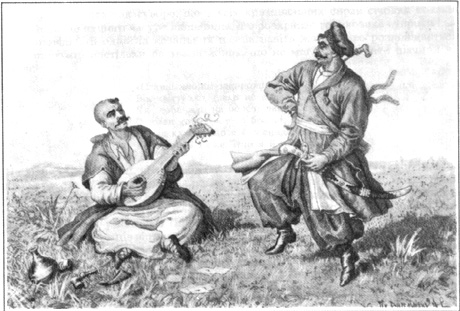